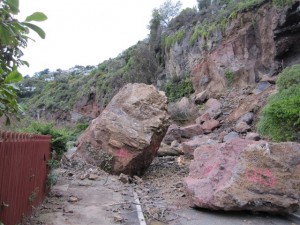 The Sumner Rocks T-shirts, bumper stickers and street party were great morale boosters, but behind the fun slogan lies the cold reality that the boulder problem is a big one.

Liquefaction has hogged the headlines, but the threats posed by unstable cliffs and rocks on the Port Hills will be tricky and potentially very costly to fix.

That was brought home to me during research for a North & South story (in the latest issue of the magazine) when I spent a morning with a geotech crew working on a hillside above the Summit Road. The previous day we’d had a 3.8 quake which had shaken loose large boulders that previously seemed quite stable and it was an eye-opener watching the crew using air bags, crow bars, explosives and a fair bit of physical grunt to shift unstable rocks.

The Christchurch City council has promised to have answers by the end of June for more than 500 red stickered property owners whose homes are in boulder fall zones or on dodgy cliff tops, but chances are it will be some time before proposed rock protection measures materialise.

Last year local geotechs visited the Swiss Alps to view rock protection methods, including sophisticated steel mesh fences with braking systems. A quote to build one of these fences in Morgan’s Valley was about $1.9 million; however, given its potential to protect some very expensive homes, it could be a worthwhile investment.

Money, of course, will be a huge issue. If homes have to be abandoned, who is going to compensate owners for dwellings which often have little or no damage? The council official I interviewed argued that homes deemed uninhabitable because of rock fall or cliff collapse should be offered the same deal as red zoned homes affected by liquefaction, but that’s a policy decision for the government.

And what about the insurance companies? Christchurch lawyer Dr Duncan Webb believes that where broadly worded insurance policies refer to “physical damage or loss,” there is a strong case for insurers to pay out on undamaged but uninhabitable homes.

He says this scenario is almost identical to a case where undamaged mining equipment was trapped behind a 100 metre rock fall when a mine collapsed. So if a large teetering rock threatens your home, the fact that the rock has not yet gone through the middle of your house makes no difference to the fact that it cannot be occupied, therefore insurers should pay.

Whatever the outcome we have to face the fact that, even if the ground stops shaking, rocks will continue to fall, as they have done for years. In the eighties a large chunk of the rock face below (now closed) Edwin Mouldey Track fell without warning in the middle of the night. Pre-quakes, boulders (including some very large ones) regularly fell on to properties in Heberden and Wakefield Avenues, especially after heavy rain. Unfortunately the quakes have loosened things up and if we get a wet winter there is the very real possibility of further rock falls. Hooray for shipping containers – they may be ugly, but at least they work!